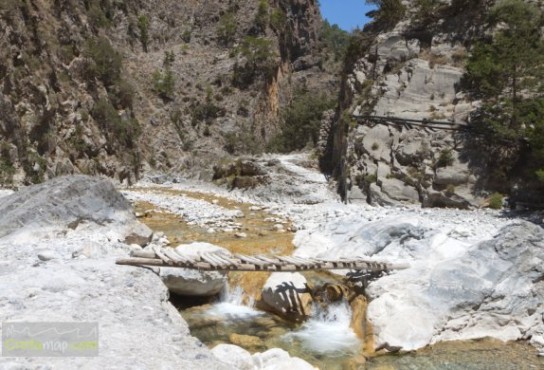 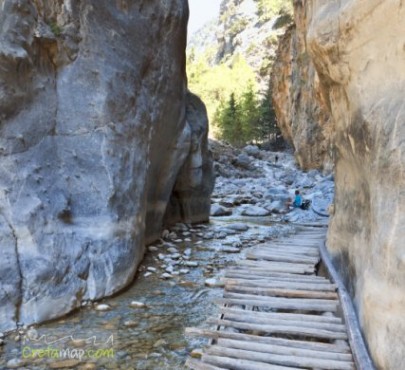 In order to go to Samaria Gorge from Apirathes we can suggest the following route.

Go from Zourva to Meskla and from there via a small country lane, drive towards Lakki. From Lakki, you drive up to Omalos and from there you continue to Xiloskalo which is the entrance to the Samaria gorge. We recommend that your arrival time at this point is early in the morning( 7oo-8ooa.m.),since your walk through the gorge is estimated at about 6 hours, then reaching the seaside village of Agia Roumeli. Here after relaxing and taking a revitalizing swim in the cold water of the sea, you will board the 17:30 boat to another seaside village, Sougia.

In 1962 the is declared a national park with the intention of protecting the rare flora and fauna found in 48590 square meters that it covers and in addition to conserve the local cultural legacy. In 1981 UNESCO declare the national park as a biosphere reserve within the bounds of man and biosphere. Crossing the  plateau of Omalos where the house of Hatzimihali Gianari lies who was a hero and deader of the Gretain’s revolution, you will then come to Xiloskalo , the entrance of the gorge.

Opposite we can see the bare mountain top of Gigilos, with a height of 1864 meters. According to mythology this is the mountain top where Gretan- born Zeus placed his throne. On your right and left of the gorge there are the Gretan  mountains which cover an area of 40 kilometers, including the greatest gretan mountain range of Lefka Ori with the highest mountain top being Pahnes at an altitude of  2453 meters.

The distance between the entrance and the depth of the gorge is about 3 kilometers. Going downwards from Xiloskalo one can observe how imposing the mountain top of Gigilos is while at the same time the guest is fascinated by the unique, beauty of this wilderness.

The passing of the gorge is done within the imposing mountain tops of Gigilos, Pahnes and Zaronokefala from the unique vertical slopes stone slopes, the height  of which ranges from 300 to 600 meters . Great in variety is that of the natural habitat where all forms of wild life breed and reproduce , each has its own particularity from a geomorphologic ground, plants and animals while its continuous variation is extremely attractive. The national park  covers an area of altitude up to 1235 meters. Following the main path the visitor is forced many times to walk on its banks or to even cross the surge of water which comes from the slopes of Linoseliou and ends in the Livico sea , at the same time another 22 springs throughout all the journey , consist springs of refreshment for the walking journey of the gorge. In a distance of 4.5 kilometers from Xiloskalo we came across the church of Agios Nikolaos . According to tradition the church had been built on the rains of the ancient temple of Apollona. However the English guide Basleis claims that the ancient city of Keno was situated there where the cretan godess Artemis or Birtomartis was born.

The plant kingdom of the park is exquisite. More than 450 kinds of plants exist here . To of which are native kind and sub-speciest of Crete such as Dictamos , Erondas, Evenos, Ambelitsia and pine while Vouklero and Nisiti are found exclusively in the gorge.

Here is where the Cretan badger lives the Cretan ferret and Cretan rat and an native subspecies of lizard. On the steep slopes many kinds of eagles nest and even rare species found in Europe. The most famous animal in the national park is the wild goat known and above for its beauty intelligence and agility. Once was the sacred animal of the goddess Artemis of Diktini.

According to mythology Cretan born Zeus was fed with the milk of the wid goat . Sanadas when Rea hid him in Psiloriti in order to avoid his father’s Cronus’ anger . Sanada was worshipped in Minoa times where she was linked to the godesses of natural fertility, depicting , Sanada with wings.